On January 15, 2020, the US and China signed a “Phase 1” agreement in furtherance of efforts to resolve their ongoing trade dispute.  Chapter 1 of the agreement covers a wide range of IP issues, with particular focus on patents, trade secrets and counterfeiting.  Set out below is an overview of the provisions most relevant to trademark owners.

Under the agreement, China agreed to publish an Action Plan by February 15, 2020, which may help in better understanding how general obligations will be implemented.  SIPS will provide a more detailed report once the action plan is issued. 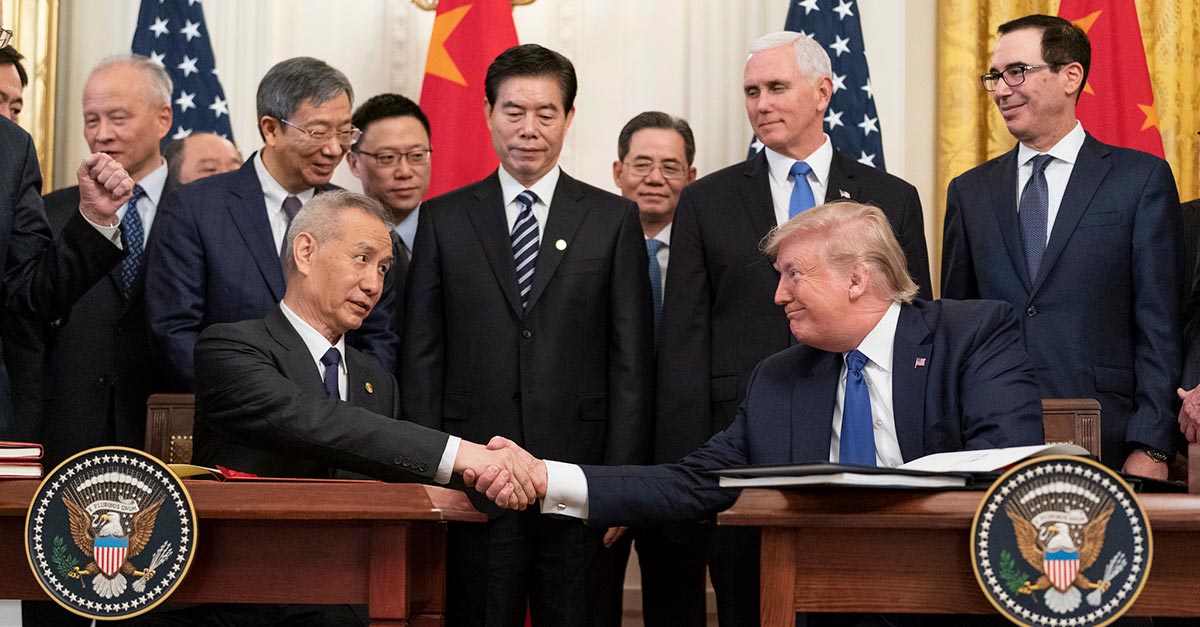 Overall, trademark owners are likely to find the agreement of limited benefit in their day-to-day enforcement work.  This is in part because the Chinese government and legislature have already introduced new laws, regulations and policies covering many of the trademark issues in the agreement.  But it also reflects the fact that US negotiators appear to have only sought to secure undertakings from the Chinese government on a relatively narrow range of “asks”.

It is likely that negotiations over these issues will take place as the two governments begin their engagement over a “Phase 2” agreement.  But this remains to be seen.

The agreement states that China will provide “adequate an effective protection and enforcement” against bad faith trademark registrations, but no specific measures for doing so are defined in the document.

Fortunately, China has already made significant progress over the last year against bad faith registration, including through amendment of the Trademark Law (effective November 1, 2019), and through the issuance of new regulations (effective December 1, 2019).  Together, the revised law and regulations provide a clearer legal basis for rejecting pirate applications (thus avoiding the need for oppositions) and defining bad faith.  They set out the possibility of imposing administrative fines against both bad faith filers as well as their trademark agents and the possibility of “social credit” penalties is suggested as well.

Responding to concerns from US IP owners over onerous legalization requirements for foreign-sourced evidence, the Chinese agreed in Article 1.30 of the agreement to “streamline” authentication procedures and eliminate them where the veracity of evidence can be supported by “witness testimony under penalty of perjury” or via “stipulation”, i.e., the consent of the other party in a dispute.

It remains unclear for now whether these new provisions are intended to eliminate or otherwise simplify the strict and complicated requirements for legalization that apply – in particular to notarized powers of attorney, certificates of incorporation and certificates of identity of legal representative used to support appeals of registry decisions.

A conservative reading of the agreement would limit the new provisions on legalization to supporting evidence and exclude application to documents intended to prove the IP owner’s identity or their lawyer’s authority to represent.

While significant changes in the criteria for establishing criminal enforcement against trade secrets are clearly set out in the agreement (Article 1.7), no such changes are offered with respect to trademark counterfeiting or copyright piracy.  This is notwithstanding the fact that the US and other countries aggressively challenged China’s approach to criminalization through a WTO dispute in the mid-2000’s.

That said, the agreement contains broad language which seems intended to increase the number of cases transferred from administrative enforcers to the police where there is “reasonable suspicion” of a criminal violation “based on articulable facts”.  It is however unclear whether Chinese authorities believe existing laws and regulations already meet this standard.

Notably, the agreement indicates China will increase both criminal and administrative penalties as well as civil damages in two stages:

In the first stage, penalties and remedies will be imposed “at or near the statutory maximum” to deter infringements.

Article 63 of China’s recent amendment of the Trademark Law increased maximum statutory damages from RMB3 million (US$428,000) to RMB5 million ($714,000).  Meanwhile, for “malicious infringements” of trademark rights, the maximum compensation level was increased from 300% to 500% of the relevant base.

Article 63 also increased the maximum level of administrative fines in more substantial cases from 300% to 500% of the “illegal business revenues” of the infringer, with fines of up to RMB250,000 (US$38,000) in cases where the infringer’s revenues are under RMB50,000 (US$7,100).  The law also provides for “heavier fines” in cases of repeat offences within five years or “other serious circumstances”.

Draft rules recently issued by the China National IP Administration (“CNIPA”) for public comment suggest that the term “serious circumstances” will be defined broadly to cover a range of circumstances, including those where “well-known” marks are involved and where violations have taken place over a period longer than 18 months.  These proposed rules are expected to be issued imminently.

The agreement states that “in a subsequent step”, China will “increase the minimum and maximum ranges for “pre-established damages, sentences of imprisonment and monetary fines”.

Again, China may well argue the recent amendment of the Trademark Law and the impending regulations noted above satisfy these requirements.

The agreement contains an entire chapter devoted to “Piracy and Counterfeiting on E-Commerce Platforms”, reflecting long-standing concerns over the enormous scale of infringements taking place on Alibaba and other online platforms based in China.

While the number of legal and practical barriers to cost-effective enforcement in the online environment are legion, the agreement only contains two provision that seems intended to generate substantial results.  Article 1.14 states:

“China shall provide that e-commerce platforms may have their operating licenses revoked for repeated failures to curb the sale of counterfeit or pirated goods”.

Again, China may well argue that its existing laws and regulations give relevant authorities the power to revoke and suspend business licenses and permits required to offer online trading services.  But further clarification in this regard would no doubt be welcome, perhaps in the form of future implementation of regulations to China’s new E-Commerce Law, which entered into effect on January 1, 2019.

Meanwhile, Article 1.13 of the agreement suggests China will amend the E-Commerce Law to extend from 10 to 20 days the deadline for IP owners to file judicial or administrative complaints against vendors that successfully filed counter-notices with online trade platforms.

No mention is made in the agreement as to whether “online trade platforms” is intended to cover social media platforms where counterfeiting and other IP infringements are increasingly pervasive.

Counterfeit Medicines and Other Goods Posing Health and Safety Risks

Articles 1.18 and 1.19 of the agreement reflect the US government’s prioritization of efforts to address both counterfeit pharmaceuticals as well as the supply of ingredients used to make them.

Article 1.18 broadly requires China to take “effective and expeditious enforcement action”, to share information on suppliers of raw materials, and to publish data annually on enforcement actions taken by administrative authorities responsible for seizures, fines, revocation of business licenses and other measures.  Oddly, the agreement lists out these authorities, but does not include among them the main administrative authority responsible for enterprise registration and administrative enforcement of trademarks, the MSBs and their parent organization, the State Administration for Market Regulation (“SAMR”).

Meanwhile, Article 1.19 indicates China will intensify enforcement against “counterfeit products with a significant impact on public health and personal safety”.  Specific measures include:

Disposition of Counterfeits and Items Used to Produce Them

Article 1.20 of the agreement sets out a range of requirements for both countries to apply with respect to the disposition of seized counterfeits.  Oddly, these provisions only address fakes in the context of action by customs, civil courts and criminal enforcement – there is no mention of administrative enforcement by local MSBs, which arguably handle the bulk of seizures of counterfeits in China.

In short, and reflecting provisions in China’s current Trademark Law, customs and the courts must destroy counterfeits “except in exceptional circumstances”, with the mere removal of labels being deemed insufficient. Meanwhile, in civil actions, if the IP owner requests, the courts “shall” order the destruction of “materials and implements that have been predominantly used in the manufacture…of counterfeit goods”, subject to other restricted options in “exceptional circumstances” in civil, but not criminal cases.

One major gap in IP protection in China is the lack of access to preliminary injunctions, even in relatively serious cases, including counterfeiting, and the corresponding lack of serious penalties for violations of court orders.  While Chinese legislation mirrors that in other countries, in practice, the courts have been discouraged from issuing interim injunctions in all but the most exceptional cases.

Regrettably, the agreement only attempts to address this problem the context of trade secret violations, but no other types of IP violations.  In this regard, Article 1.6 simply states that China will define “the use or attempted use of claimed trade secret(s) as an ‘urgent situation’”, thus qualifying for a preliminary injunction.

The agreement otherwise states that the US and China will “endeavor to strengthen enforcement cooperation” – a welcome message given the critical importance of intelligence sharing to facilitate seizures and criminal investigations that follow them.

Article 1.22 states that China will “significantly increase the number of enforcement actions” in physical markets offering infringing goods, beginning four months after entry into force of the agreement, with updates on such actions published online every quarter.

Notably, this article makes no reference to any actions planned against landlords, which – like online trade platforms – can play a critical role in enforcement and generating deterrence.  However, it is still possible Chinese authorities will resume efforts (previously introduced in the mid-2000’s) to encourage landlords in physical markets to stop and prevent infringements through various measures.

In any event, to better exploit the impending campaign, trademark owners with problems in physical markets in China should consider conducting fresh market surveys – preferably in cooperation with other victim brands – and presenting the resulting data to Chinese authorities with a request that the targeted markets be covered in their work.

Chapter 7 of the agreement sets out a detailed framework for the handling of future disputes between the governments over the implementation of the specific obligations of each side.  The provisions therein contain detailed procedures for monitoring compliance and fostering dialogue in stages, starting first with functional levels, then at the vice-ministerial level, and finally at the level of the USTR and Vice Premier of the PRC government.

Interestingly, Chapter 7 states that the parties affirm the continued applicability of each country’s rights and obligations under the WTO.  But to the extent particular questions are covered by the agreement, it is likely both governments will rely on the dispute resolution provisions therein, rather than those set out in WTO instruments.